REVIEW: Hunger Makes Me A Modern Girl by Carrie Brownstein

One cannot walk very far into a bookstore these days without spotting a new memoir by a familiar, talented, currently successful woman. A happy development, as I see it. I have been snatching them up ever since the debut of Tina Fey’s Bossypants – titles including Amy Poehler’s Yes Please!, Lena Dunham’s Not That Kind of Girl, Mindy Kaling’s Is Everyone Hanging Out Without Me? and Why Not Me?, etc. (Slighly outside of this category is Patti Smith, whose 2015 memoir M Train I recently devoured on the plane home for Christmas.) Today I want to briefly discuss a new nonfiction writer on the scene, Sleater-Kinney guitarist and Portlandia creator, Carrie Brownstein. 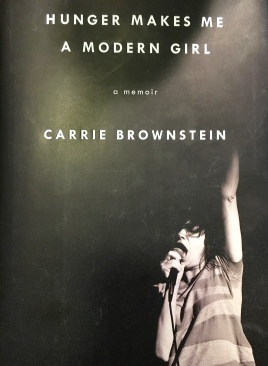 I first spotted the chalky black cover of Hunger Makes Me A Modern Girl near a Joan Didion biography in an exceedingly well-curated bookshop in St. Louis, MO called Subterranean Books. Intrigued but easily distracted, I ended up leaving that bookshop with a pocked-sized copy of Marcus Aurelius’ Meditations. Two weeks later, a friend recommended the Amazon TV series Transparent (Jill Soloway, lots of awards, great show) in which Brownstein acts, and I threw Hunger Makes Me A Modern Girl on my Christmas list.

I began Hunger Makes Me A Modern Girl hesitantly – even skeptically. Would it be interesting to me at all? A book focused on the history of a band I had never heard of until recently?

Then I read this line on the first page of the opening chapter: “My story starts with me as a fan. And to be a fan is to know that loving trumps being beloved.” With that gem of a thought, I committed to the journey. Brownstein seeks to make her journey as a young artist accessible, thought-provoking, even philosophical. 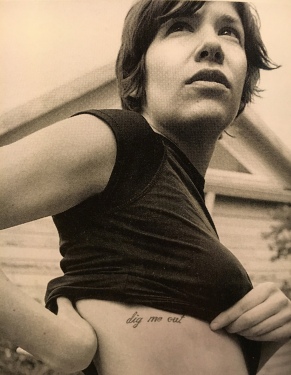 I’ve read the occasional music memoir – most recently Scar Tissue by Anthony Kiedis of the Red Hot Chili Peppers. Though reading about Kiedis’ struggles with addiction, fame, etc. was a worthwhile empathetic experience, at times it felt like an extended Rolling Stone interview: “Tell the readers EXACTLY where you were when the lyrics to ‘Under the Bridge’ came to you.”

Hunger Makes Me A Modern Girl is more than a simple chronology of album releases and subsequent tours – it is an introspective exercise into the creative process, an intentional dispelling of rock-and-roll mythology, and generally, a portrait of a young artist’s life. She discusses her transformation from concert attendee to performer, from student to creator, from fan to icon.

For example, Brownstein discusses the “codified language” of the indie music culture of 1990s Olympia, Washington. It’s a familiar concept, this snobbish side-effect of knowing a little bit too much about a particular thing. “You know [insert obscure band]?” “Cool, you should also check out [even more obscure group], they just started playing today and only like three people have heard this song.” I’m sure most people can think of a category in which they are guilty of dismissing newcomers and subtle one-upmanship. One of Brownstein’s greatest strengths as a writer is her ability to identify common social tendencies – particularly those within the music scene – and to nudge readers to reexamine them. (Relevant Portlandia clip: “Did You Read It?”)

Brownstein is an insightful writer and an appealing – if at times overly self-deprecating – personality. She discusses struggles with inattentive, independently troubled parents, anxiety and depression, and loneliness in early adulthood. Her story is relatable and strikingly modest. Additionally, and importantly, Carrie is a killer guitarist. One won’t find a trace of self-promotion in the novel, but evidence can be found in the song “Entertain” from Sleater-Kinney’s 2005 album “The Woods.”

Leave Marcus Aurelius on the shelf (to collect the dust of good intentions) and take Hunger Makes Me A Modern Girl to the checkout.  If nothing else – listen to Sleater-Kinney’s new reunion album, No Cities to Love (2015). Carrie says it best: “To become a fan of something, to open and change, is a move of deliberate optimism, curiosity, and enthusiasm.

View all posts by Liz Troyer

One thought on “Hunger Makes Me A Modern Girl”